Traditional gut strings and strings made of synthetic materials: Italian string maker Mimmo Peruffo is an equal specialist in both fields. Under his Aquila brand, he offers gut and nylon strings for a wide range of instruments. What is special about Aquila is that it uses a special machine to produce the monofilaments itself, so that Peruffo does not have to resort to ready-made nylon strings, but can control the composition of the synthetics individually and adjust and optimize them at any time.

Among Peruffo’s most recent developments are double bass strings, which he modeled on old gut strings. He used post-war gut strings of the Kaplan Red-o-ray and Golden Spiral brands, which have disappeared from the market in the meantime, as a model. These are the brands whose sound we know from recordings with Scott La Faro, Charlie Haden and many other legendary jazz bassists. Peruffo obtained strings still in existence, measured and analyzed them, and rebuilt them. Like the historical models, the Aquila replicas that Peruffo offers under the names “Golden Springs” or “Red Springs” consist of a gut core with nylon wrapping. But Peruffo did not leave it at this reverse engineering, but went one step further. He developed a second version in which he replaced the gut core with a plastic core. Sonically, this new development (“Golden Springs Synthetic”) comes very close to the replica, but has the great advantage of being more tuning stable.

In addition, he was able to eliminate a disadvantage of the original D-string. Compared to the G-string, the D-strings sound a bit duller. By adding metal powder to the synthetic mixture, the tension of the “Red Spiral Synthetic” was increased, making its sound more defined.
The new Aquila strings are aimed at jazz bassists who mainly play pizzicato. For bassists looking for a gut string replacement for slapping, Peruffo recommends his “Sugar Slaps” – monofilament (plain) strings made of bioplastic to which he added sugar (!) during manufacture to achieve the desired sound.

Mimmo Peruffo about his double bass strings at Youtube 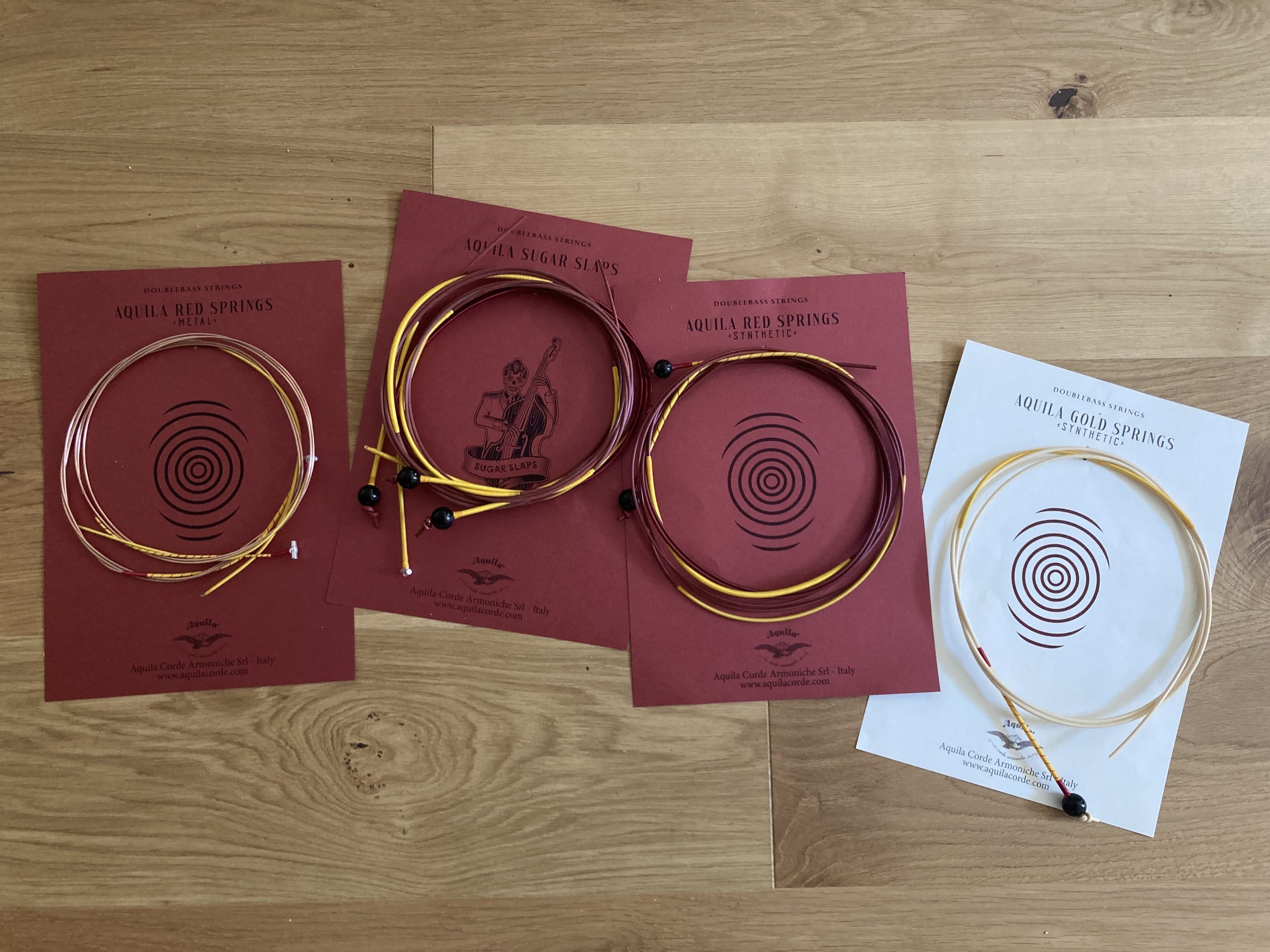 “[Peter] Elias sees a bright future for modern instruments, although he still encounters musicians who don’t agree. “A player will come to me and have the audacity to say: ‘This sounds OK for a new instrument. but I prefer old ones.‘ I have got to the point where I’ve told them: ‘Listen. I prefer dead musicians too. I’d much rather have Paganini here than you today!’ As a musician you’re allowed to live in your time. Why shouldn’t an instrument maker? Is he only there to patch up your old instruments? Or is he allowed to create something in his time – is he allowed to have ideas in the same way that Stradivari did – to try things, different projects?“

After having published my German language Kontrabass-Buch in 2018 (first edition) and 2020 (second edition), I’m happy to announce the release of the English language version:
The Double Bass Book
400 years of low notes – The double bass: It’s history, important makers, and bassists in classical music and jazz. Translation by Martin Wind.
More informations and how to order: www.Lohse-Verlag.de 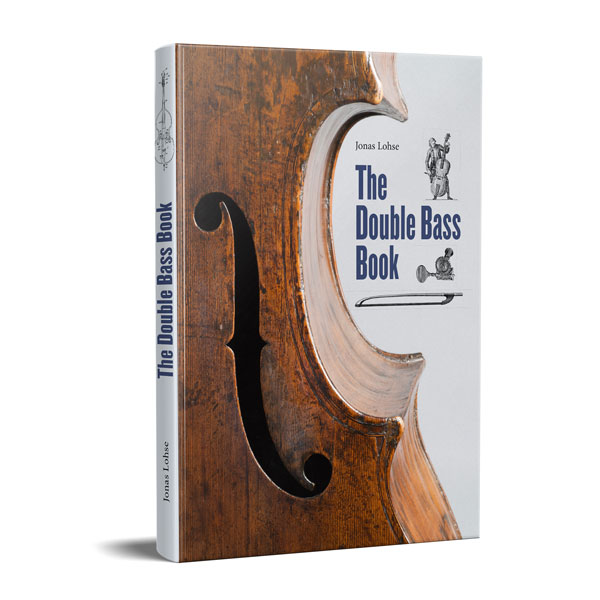 Bassist Derrick Hodge and band, living jazz legends John Scofield & Dave Holland, Queen of bass guitar Kinga Głyk, the bassists of The Netherlands Philharmonic Orchestra and Božo Paradžik and festival founder James Oesi with the Dudok Quartet will be performing exclusively at Dutch Double Bass Festival. The only festival in the world with the bass at its centre will be taking place this October 29th and 30th in Rotterdam’s brand new Theater Zuidplein. A total of 18 acts – from pop bands to classical chamber music – with the double bass and bass guitar in the lead role, will be presented.

This is the prototype of my new double bass wall mount. It is made of solid maple wood and varnished with traditional violin varnish. It not only holds the bass securely, but also serves as a bow holder and storage for rosin, metronome, pencil and eraser, or whatever else you need to practice. The bass is fixed by means of elastic band. The endpin can remain extended in the playing position. Available at www.kontrabass-atelier.de 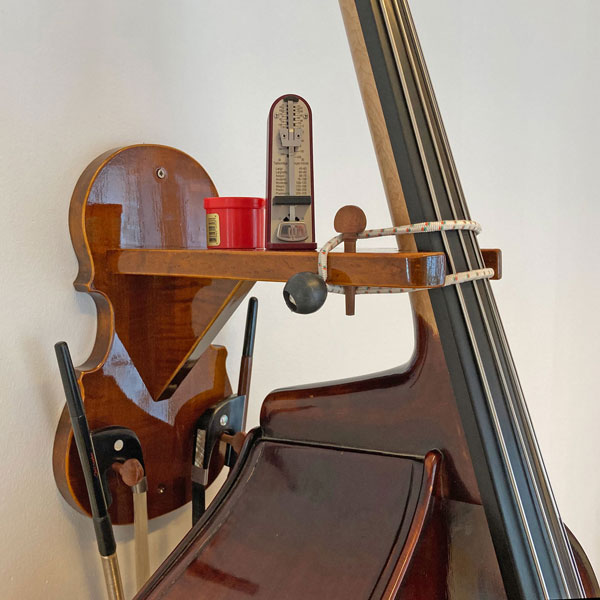 In 1947 Oscar Peterson formed his first trio. On bass at that time was not yet Ray Brown, but Bert Brown, and Frank Gariepy played drums. The trio performed regularly at the Alberta Lounge in Montreal, which was also broadcast by a local radio station. In 1949, Norman Granz discovered him there, and introduced him as a surprise guest at New York’s Carnegie Hall as part of his Jazz-at-the-Philharmonic tour. After that, they toured together for two years through in American concert halls. Finally, in 1952, Peterson formed a new trio with bassist Ray Brown. Initially, Barney Kessel joined on guitar, who was replaced a year later by Herb Ellis – in this line-up the trio became world famous.
In 1949, Evelyn Lambart and Norman McLaren created a remarkable animated film for which the Oscar Peterson Trio (called old-fashioned “Terzett” in the German translation) with Bert Brown and Frank Gariepy contributed the music. Technically interesting, Lambart and McLaren painted and drew directly onto the film stock for this color film, rather than photographing it. The film was produced by the National Film Board of Canada; at the first Berlinale in 1951 it was awarded a silver medal in the Culture Films and Documentaries category.

Hervé Jeanne is not only a diligent string tester and critic, he has also subjected six common clip-on microphones to a comparative test on his YouTube channel.
In a second video, he also tests the BassBall in detail, which I came up with a few years ago.

Marc Myers has published an interesting interview with Chuck Isreals, best know for his collaboration with Bill Evans, at his website JazzWax.

I’ve tried this little beast, and what I like best is that it is so small and light. You can even put it in a back pack. But even at this small footprint, the sound is pretty big. And the up firing speaker really helps to hear yourself better.